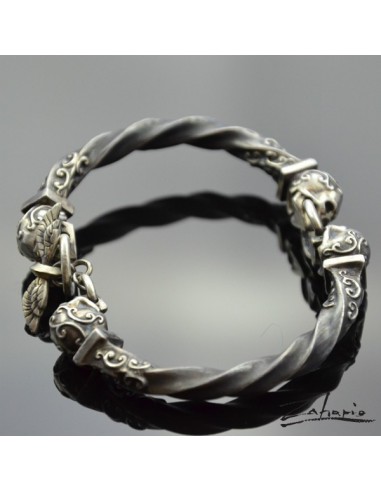 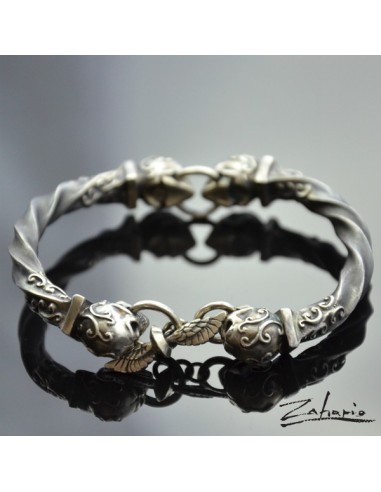 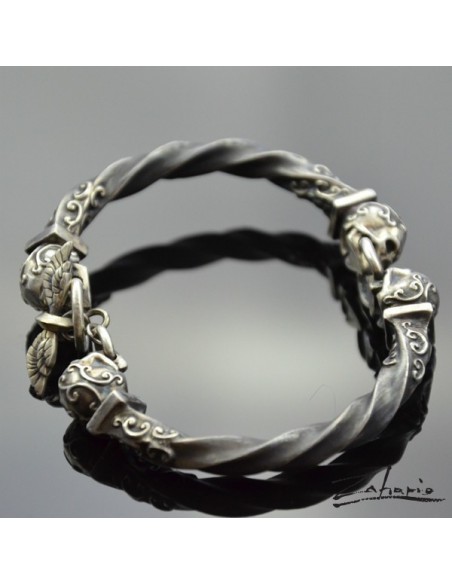 Bracelet made entirely of silver, details chiseled under a magnifying glass. Beautiful silver twist is finished with four skulls decorated in patterns referring to the Spanish inquisition and conquest. Clasp in the shape of wings. Original jewelry in a dark climate - a combination of rich ornaments, delicacy and symbols of death, evokes anxiety and hypnotic fascination. Original jewelry designed and handmade in Zahario artistic workshop.

Dark jewelry made with artistry in Zahario studio. Bracelet made of silver braid finished with skulls and a clasp in the shape of wings.

Bracelet made entirely of silver in Zahario workshop. It consists of two parts - twisted half-circles ended with skulls. Each of the four skulls is decorated with delicate pattern referring to the Spanish style from the times of inquisition and conquest. The motif also appears on the half hoops. Two skulls hold links in clenched jaws, while the clasp is formed by two skulls joined by wings. Dark art jewelry.

Cruelty, suffering, terror and death - the Spanish Inquisition became a symbol of fanaticism, superstition and sadistic tendencies and sexual fantasies hidden under the cloak of religion. The aesthetics associated with it, however, have something appealing... Black and gold from the Conquista, glamour and modesty, Catholicism and the influence of the Arabs and Native Americans. Horror seduces, and danger tempts, and risk excites.

The Spanish Inquisition silver bracelet is beautiful and frightening at the same time. It symbolizes unlimited power and oppression at the same time. It reminds us of a history that may repeat itself, or perhaps a witch hunt has already begun? Fundamentalism and power inevitably leads to suffering and the outgrowth of any idea. Be aware.

What does the skull symbolize in the European tradition?

It is a symbol of death and humanity at the same time. In Christianity it appears as an attribute of saints, depicting the futility of human life, which is only a prelude to immortality. It also symbolizes transience, the inexorable passage of time, mystery and danger.

An original gift idea for a self-confident person who likes expressive and symbolic jewelry. The bracelet is like a manifesto of independence, disagreement with the world in which religion rules. Made by a Polish designer with precision and craftsmanship, a unique decoration with a message.

The bracelet is made entirely of silver. The half-circles made of precious metal have a decorative twist and Spanish-style ornaments. Similar ones are on the skulls. All elements are made with precision, details chiseled under a magnifying glass. This is a real masterpiece from Zahario artistic workshop. Dimensions of the bracelet may vary slightly due to the individual performance of each piece.

The author's Zahario jewelry is characterised by precision and artistry of workmanship. There is no kitsch or exaltation in it, instead it is characterized by a huge dose of fantasy up to madness. It is full of symbols, oddities, creatures - as if from a dream or a poem.

It is also a deep reflection on life, transience, and the experiences that shape man. Each work of Zahario should be treated as a metaphor.

The jewelry is signed with the ZAHARIO logo in the form of a rectangular pendant 8 mm long and 4 mm wide.

Each order is sent in an elegant package.

Note: It is possible to adjust the length of the bracelet on request.

The given bracelet dimensions may change slightly due to the individual execution of each piece.